Central Economics Wiki
Register
Don't have an account?
Sign In
Advertisement
in: Microeconomics, Theory of the Firm

A monopoly exists when a specific individual or an enterprise has sufficient control over a particular product or service to determine significantly the terms on which other individuals shall have access to it. (This is in contrast to a monopsony which relates to a single entity's control over a market to purchase a good or service. And contrasted with oligopoly where a few entities have )

Sources of monopoly power/barriers to entry[]

Special techniques or production methiods are involved, or ownership of unique factors of production.

Intellectual property rights such as patents and copyrights.

de Beers controls, through a cartel, about 70% of the market for diamonds, which it has tried to maintain by controlling the mines and the wholesaling chain.

Granted, most countries have laws which limit the creation and activities of monopolies. For example, the anti-trust laws in the US are among the most severe in the world, and making it illegal for a firm to have monopoly power at all. This was due to the dominant monoplies created by Andrew Carnegie (steel industry) and John D. Rockefeller (Standard Oil Industry) who both ran ruthlessly agressive monopolies during the 1880's.

The theory of market structure based on assumption. A natural monopoly happens when the cost of production declines in what is called the "relevant range of product demand." This is where the cost curve is below the demand curve. This makes it cheaper for one large company to supply the good rather than miltiple smaller companies, and without government intervention, a natural monopoly will usually occur. They have the same innefficiencies normal monopolies do.

A natural monopoly can also occur when one company is just plain "better" than all other companies so that consumers demand their goods more and all the other companies are forced out of the market.

As will all types of markets, a monopoly maximizes profit where MC equals MR. In the graph below, the green box represents the profit generated by the firm. 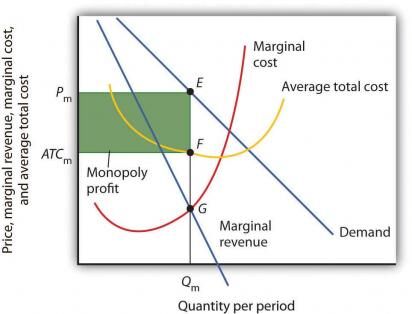 Advantages and disadvantages of monopoly in comparison with perfect competition[]

If a company has a monopoly in a certain good, that company can choose to set their prices to wherever they want. This is because the demand curve for their good becomes unit inelastic. This means that there are no substitutes for the good. Therefore, when the price changes, the quantity demanded will not change. This is good because it allows the company that has the monoploy to make an enormous, otherwise unachievable profit. Another advantage is the place a monopoly under control of a good that has negative externalities. This can reduce the amount of the negative externality good sold and a profit for the company. Yet another advantage of a monopoly is that it can be efficient. For example, the government allowing an electricity company to have a monopoly over a region so that everything is more efficient for all people involved.

A high market concentration (small number of sellers) does not always signal the absence of competition. Sometimes it can reflect the success of leading firms in providing better quality products, more efficiently, than their smaller rivals. A monopolist might be better positioned to exploit economies of scale leasing to an equilibrium which gives a higher output and a lower price than under competitive conditions. We assume that the monopolist is able to drive marginal costs lower in the long run, finding an equilibrium output of quantity and pricing below the competitive price.

Community content is available under CC-BY-SA unless otherwise noted.
Advertisement